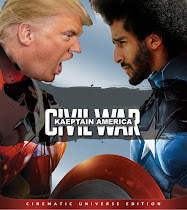 Two years ago, Colin Kaepernick knelt during the singing of the national anthem. He did it because he wanted to protest the racial murders of unarmed Black people and the tyranny of a justice system that protected these murders.

Outrage was fast, going all the way to the President. Kaepernick was not supported by the players league and even had the most successful rapper in history undercut him to make a deal with his bosses in the NFL.

Kaepernick was blackballed by the league, vilified by his former colleagues and shunned by so-called patriots. The powers that be had won.

Two years later, all hell has broken loose and we see Kaepernick was right.

George Floyd murdered on TV, Breonna Taylor shot in her home, Botham Jean killed in his own apartment and Jacob Blake shot seven times in the back on video, protests in London and all over Europe, people in every industry having open and hard discussions about race and racism, and as of today, every player in every major sport has walked off the job in solidarity with Kaepernick's cause.

The Civil War has begun.

All of the famous and non-famous people who refused to support Kaepernick's protest will forever have to wonder if many of the dead would be dead if all of us had joined him and turned our eyes to murderous injustice. Just think of this alternative timeline:

Sadly, that did not happen but at least now all of America can see what murderous pigs some of these cops are and how we have a racist system that encourages brutality and targets Black people.

But we are also seeing that there is a segment of America that not only does not care about Black Lives, but wants to extinguish them. And I am not talking about just the openly racist Boogaloo assholes, I'm talking about the guy that lives down the street and around the corner, the coworker and that smiling face you see every day. Many white people have no idea the depth of their own racism and many Black people have no idea of the depth of our mental conditioning to accept racism and how this adds to the hate and violence against our brothers.

America has always pitted the races and the classes against one another and even though we know this and can talk and write about it (like I am doing right now) we never seem to do anything about it.

Everybody wants change, but no one wants to change.

And so the Civil War continues only now the war of words, thoughts and ideas had turned into a war of chaos, fire and killing. Once again people demand the equality promised by the Constitution and once again, violence rises up to defeat that demand because as I said before, the nation's promise of freedom is a fraud, a lie and now that we know it, we can finally battle with the truth, and that truth is there are no dominate races, just people who are more evil, violent and willing to murder to live in the comfort of denial and privilege.

Our nation has given aid and comfort to domestic terrorist groups as long as their philosophies are based on race. Not even a Black President and a Black AG would put the Klan on the terrorist watch list. America's investment in violent racism is deep and now we all must pay this price. The men shot in Kenosha were white and their killer was white.

Jay-Z famously said we're past kneeling and he was right, but the path beyond the protest is not a cure, but the fatal and violent consequence of never respecting the kneeling in the first place.

The title of this piece is not just a clever play on words. The movie Captain America, Civil War offers us a metaphor that could not be more potent: In the film, Captain America splits the Avenger's into opposing factions because he refuses to denounce his old friend who has been turned into a murderous terrorist by evil forces. The film puts the comicbook fan in the middle of his own loyalties because this terrorist is a beloved character from the past. Captain America wants to forgive and take back his friend, while Iron man and others want him turned in to the government.

In real life, we have a President who defends racism and racist killers and asks us to understand their motivations or just shut up and behave, and we respond just like Iron Man-- with war.

Posted by Gary Hardwick at 8:18 PM No comments: 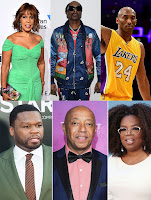 Why has there been such anger and vitriol about the Gayle King Kobe Bryant interview? Well, It's not just a journalistic faux pas; it's deeper, because everything with black folk runs deep.
There has always been an attempt to malign Black history to justify current racism or brainwash the masses into believing the worst of us. Dr. King, Malcolm X, Sam Cooke and other have had their legacies attacked long after they were buried.
More recently, we saw this trend during the Black Lives Matter Movement, when the state consistently impugned the character of the dead Black men in order to justify a white cop's action in killing them, even when they were not armed. "Oh, he was a thief! He sold drugs! He was a thug! I was scared, Your Honor!" In each case, the Black man was reduced to the worst thing he may have done and was unable to defend himself because he was conveniently dead.
Then we see Michael Jackson taken to task after his death in a documentary produced by some white men and Oprah Winfrey, even though all the cases were dismissed or settled years ago. In the end, it all turned out to be lies and the whole thing fell apart.
Then right after that, Russell Simmons is attacked in a documentary again produced by Oprah, but wait, Russell is not dead, and so he pushes back and that also fell apart and Oprah pulled out of the documentary before its premiere.
And all the while, it feels like black men are being punished over #Meetoo issues (Cosby, Nate Parker, R. Kelly, Cuba Gooding Jr.) but white men are free (Woody Allen, Polanski, Been Affleck, Kevin Spacey, Less Movees, Matt Lauer, Brett Ratner, Charlie Rose, Bryan Singer and more) Once again, it feels like white society's heinous injustice standard aided and abetted by, in this case, a black woman.
Then a tragedy of epic proportions happens. NBA legend, Kobe Bryant and his daughter die in an accident and while the man and his little girl are still in the morgue, Gayle King, Oprah's bestie, presses Kobe's friend, Lisa Leslie on national TV about an assault case that was dismissed, one bad incident in a life filled with family, love, success and legendary accomplishments.
The pot boiled over. It felt like an agenda where Oprah had failed twice and so someone dispatched Gayle to just "get some Black man on this issue." And while this is probably not true, in the world of Black America, we have seen men and women railroaded, poisoned experimented upon and subjected to all manner of secret criminality.
People saw injustice, they saw two famous black women surrounded by certified white male predators, but only willing to come after black men when they were no longer alive to defend themselves, just like the slander against Dr. King, just like the smear on Trayvon Martin and Eric Gardner, just like the same perverted justice the Senate used to acquit a guilty President.
So folk got mad and as soon as another Black man voiced his outrage, it turns into Black men attacking Black women, complete with Oprah crying on TV and saying there were death threats and a former National Security Advisor tweeting for Snoop Dogg to "back the fuck off." And before you could say retweet, people pointed out that Oprah's tears were phony and she had no proof of any threat, Susan Rice has a white husband and a Trump-supporting Republican son and Black men should keep their dicks in their pants, anyway. And just like that, Black men and women are at each other's throats, holding our pain, and accusing one another like Miss Celie making the curse sign at Mister in The Color Purple.
The whole idea of Black Lives Matter was of course the reality that Black lives did not and never did matter. But we can't say that about Black America. I was sure we mattered to ourselves. Now I wonder if both sides are right and we're infected with the poison of our oppression in how we treat each other.
None of the dead are coming back and what we have left here must be managed better. I don't need apologies from Gayle or Snoop Dogg. I don't want anyone cancelled, whatever the hell that means. I want us all to stop acting like we are not in this together because of our gender, status, money or fame. A handful of white men ended the Republic last month, and this is what we argue about?
When we get past this, as we always do, I hope we can have a more civil dialogue about how we treat one another, because if we can't, we will surely be here again.